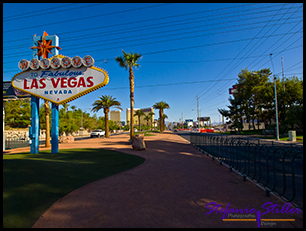 Despite a long night we were awake early again. And again we were able to watch „our" pool cleaner at work - it had something reassuring.

We used the jetlag and so the early time to finally take pictures of the famous Las Vegas Sign. Around 8am we arrived at this photo hotspot. And the plan worked out. When we arrived, there was still a coach on site, but they left very soon.

When the bus was gone, there was only one vehicle in the parking lot besides us. No queue! No waiting! Beautiful soft morning light! 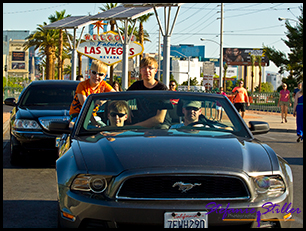 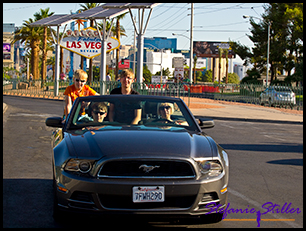 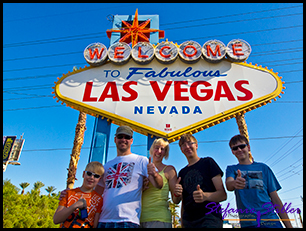 A man asked me if he should photograph us, it wouldn't cost anything. It was clear to me that he wanted a tip. But I also wanted to habe picture with all of my family. Briefly I thought, what I would do, if he now run away with the camera, that's when it started.

Man, he pulled off a program. He took one photo after another of us. He cheered us on: We were in Las Vegas and should laugh. Then he sent the guys out of the picture and only took pictures of Holger and me. Of course, he also demanded a kiss. Finally, he took pictures of the boys. 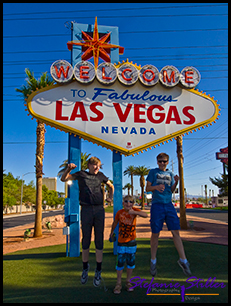 That was really fun. He understood his job. And of course, he earned a good tip. 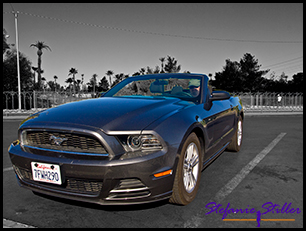 We drove back to the campground and had a leisurely breakfast. Meanwhile, the first washing machine ran through. The banana mass wanted to be removed. Both Holger and I only had one vest with us.

Around 11.30 we started our small convoy. First, I wanted to stop by the Bass ProShop – a recommendation by a good friend. The Bass Pro Shop is really well decorated. My short one loved the stuffed animals. But not only the décor was good. The whole shop was well stocked. My "big one“ found a hat for himself and I bought a new hiking pants for zipping and a hiking blouse. In addition, we took water treatment tablets and tension straps with us for our hikes. 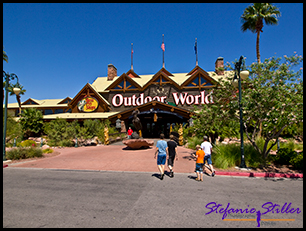 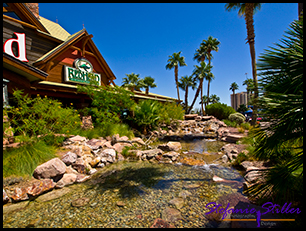 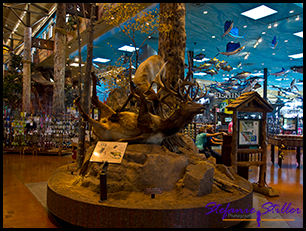 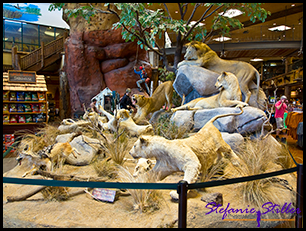 Now came a difficult moment for Holger. He now had to part with his beloved Mustang.

That was tough. He would have liked to have taken the car with him for the entire round trip. He bravely drove up to Alamo. I was able to stop with the RV right in front of the building and wait there for him and Justin.

After shopping again at Walmart, we left Las Vegas around 3pm and started this year's round trip.

A short distance we went over the I15 to the south. But already at Nipton we left the interstate. Via the Morning Star Mine Road we went to the Mojave National Preserve. According to my guide, this should be the most beautiful route and already show some Joshua Trees. And indeed: Great specimens of this interesting plant soon appeared.

Of course, I stopped at the side of the road - we were almost alone on this road – grabbed my camera and went outside. Boah, was that hot out here! The sun burned down from the cloudless sky and no wind went.

I walked a few meters to find beautiful motifs. And experienced an absolute premiere: Here you heard nothing at all! No traffic! Not a bird! No wind! No leaves rustling! No insects! Nothing!  But it wasn't quiet! It was as if I had a bubble cap atop of my ears, which on the one hand made me hear the sound of blood and on the other hand gave me the feeling of pressure on my ears! That was really loud! For the first time in my life, I actually heard and felt how loud absolute silence can be! 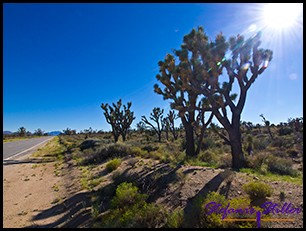 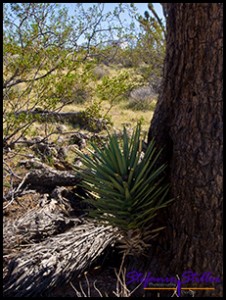 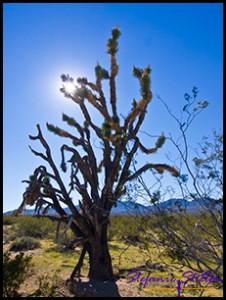 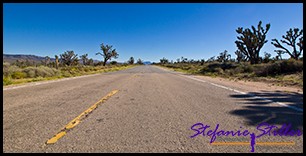 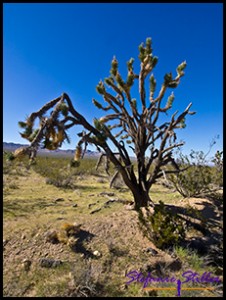 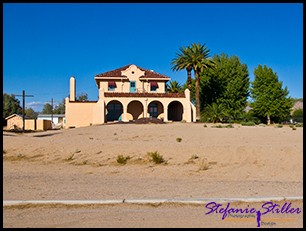 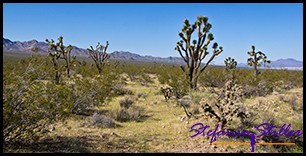 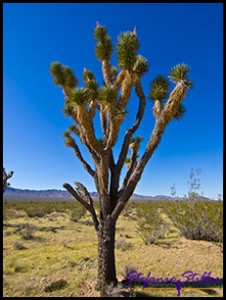 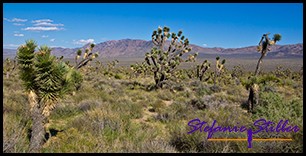 We continued to the junction to the Kelso Dunes. It was a wide path with a lot of split on it. The texture quickly brought back memories of our 2011 trip to the Klondick Bluffs in Arches NP, where we managed to shake the screw of one of the exterior mirrors loosely. Because we were dealing with similar washboard conditions here. But the road was only 3 miles long and so I drove along the road with leisurely 5 to 10 mph so I wouldn't catch trouble from my passenger again. 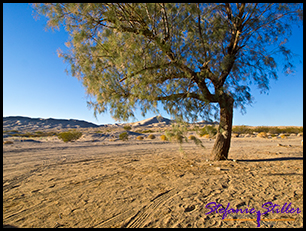 Around 6pm we arrived at a small round place. Three trees stood in the middle. In front of us the dunes. No man except us. Holger asked in amazement about the campground. I told him that there would be no official campground here, but we were allowed to stand here overnight. He couldn't believe that I just wanted to stop in the wilderness overnight....

We looked for the right position for our RV and then we sat down comfortably in front of the motorhome and enjoyed the loneliness. That was probably the absolute greatest contrast program ever. In the morning still in lively Las Vegas, in the evening all alone in the desert. 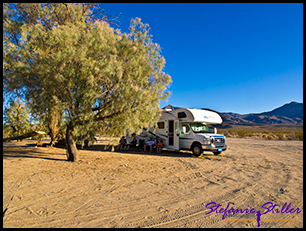 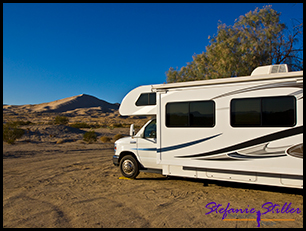 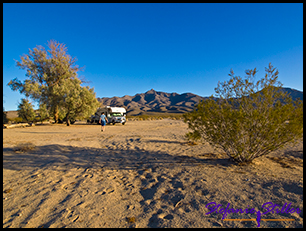 However, the silence did not surround us at first. Because in one of the trees a bee colony had quartered. But they left us completely alone and so we shared the place peacefully. As dusk set in, the buzzing disappeared. But not slowly! No, within only 2 minutes it was suddenly totally silent.

We took out the grill. Today we ate burgers. Unfortunately, Marwin had  no appetite and wanted to go to bed early. 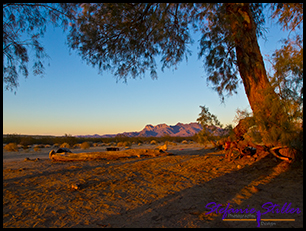 We sat around the campfire even longer, chatting and getting excited about a longer black bug that was constantly crawling past our feet. While my family slowly disappeared into the beds, I tried my way into star trails and night shots. And was still outside until 11pm. Unfortunately, the pictures have not turned out well because there is just too much light pollution on them. But I enjoyed the peace and the starry sky. Although a bright stripe could be seen on the northern horizon, where Las Vegas was... 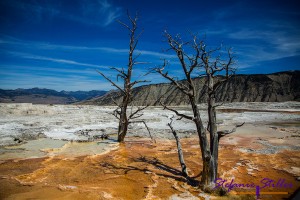 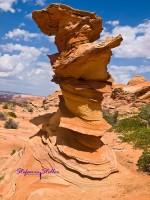