At 5.30am I was already awake and of course I did not miss the sunrise. With a hot cup of coffee and the camera on the tripod, I watched the sun slowly rise up and some bats still at breakfast (or dinner). I enjoyed the peace and quiet.

Not before the sun was shining over the horizon the buzz known from the previous evening did start again. 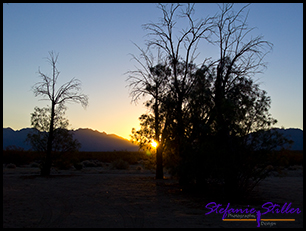 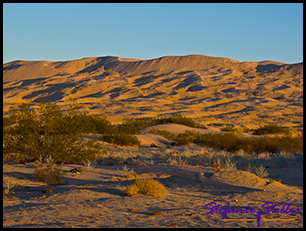 Surprisingly early our kids also crawled out of their beds today. And because Marwin wanted to climb the dunes last night and it was already very warm this morning, we decided to do our first hike before breakfast. Unbelievable, already at 7.15 we marched off.

Making long story short: we didn't make it to the dunes. But we found a lot of traces. There was really a lot going on around us the night before. 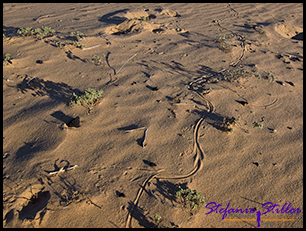 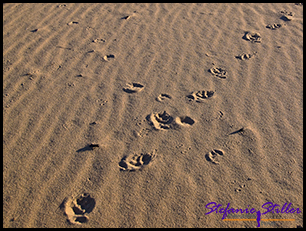 Finally, we were able to assign one of the tracks. It belonged to our friend from last night - the black beetle. Since he was stuck in a sand hole, we helped him upstairs.  This afternoon we should learn some interesting and also frightening information about the little guy. 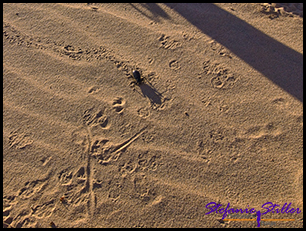 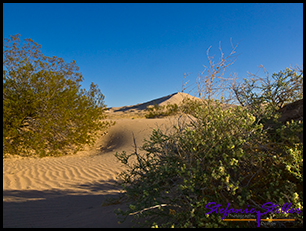 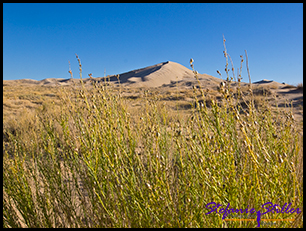 Shortly after 8am we were back at the RV and enjoyed a delicious porridge for breakfast. It was during our time in London that we learned to appreciate this. And thanks to “Quakers”, porridge is now also available for quick preparation in the microwave. And even here in the wilderness we had them available. 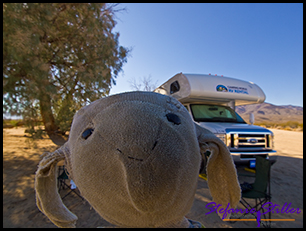 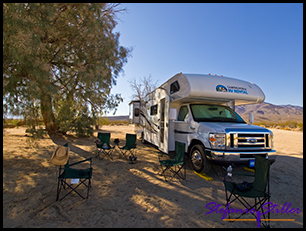 Relaxed we made the RV ready to go and already at quarter past nine we were on the road - the washboard road.

We only had 100 miles ahead of us, but these dragged on like chewing gum. Oh, was that miserable to drive. Right and left only dessert, no more Joshua Trees! Nothing, which was worth looking at. Soon I had trouble keeping my eyes open and just wanted to arrive. 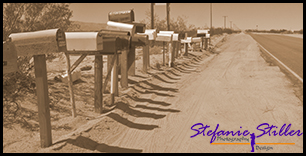 There was a small hope when we turned onto another section of Route 66. 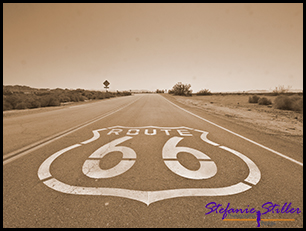 I was happy when we finally reached Twentynine Palms. I had entered the Visitor Center of Joshua Tree NP and the GPS guided us directly there. Here we bought the Annual Pass, inquired about travel conditions and Marwin picked up his Ranger Booklet. Then we visited the small exhibition in the Visitor Center. There should be tarantulas and turtles inside the park. Oh, and there was our friend. But what was written there? He shot smelly liquid out of his butt when he felt threatened. Oh man! Once again we were lucky.

We took in fresh water, as there were no hook-ups and no dumping station on the campgrounds in Joshua Tree. We had to shop and refuel for a short time and then we went the last miles to the Joshua Tree NP. 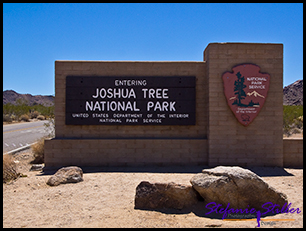 It was low season for the park - due to temperature. Most of the campgrounds were closed, others we were not allowed to drive in with the big RV. From the remaining ones we had chosen the Jumbo Rock Campground, as there were many boulders for climbing for the boys.

We drove through the entire campground once and found at the end a nice large site with many rocks that are suitable for climbing. And of course we used it immediately.

It was really hot here and so we enjoyed an ice cream. In the shadow of the RV. Afterwards we retreated completely back into the RV and enjoyed the air conditioning. Marwin complained of abdominal pain and his forehead was hot. He had probably been infected by Justin. So now he got the medicine. This would help against both pain and fever.

At 3.30pm I called for departure. I wanted to see a little bit of this park. 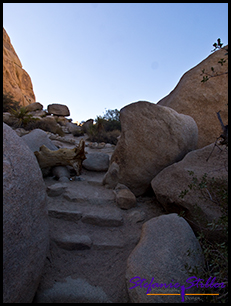 The first destination was the Hidden Valley. Here a natural valley has emerged between high rock formations, into which only a single narrow path led. Due to the seclusion, a unique subculture of plants was formed, which nowhere else did exist. According to a local legend, the two outlaw brothers Charlie and Willie Button accidentally found a narrow passage into the Valley. They teamed up with cattle thief Bill McHaney. Together they hid stolen cattle here in Arizona, rebranded them and sold them back in California. 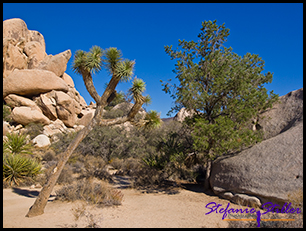 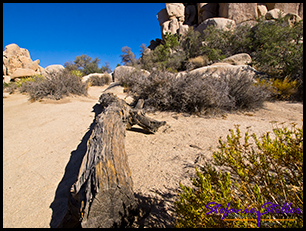 An approximately 1-mile trail led around the Hidden Valley. Regular information boards inform about flora and fauna, as well as some stories. 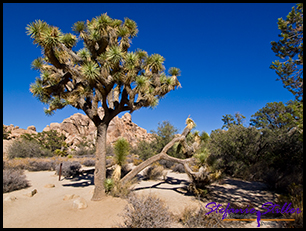 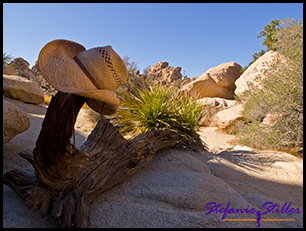 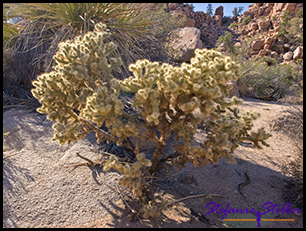 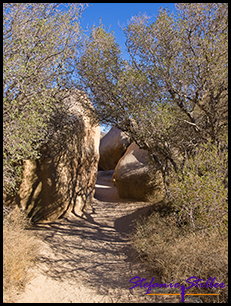 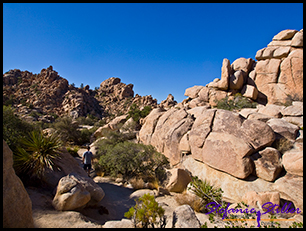 Afterwards we drove on to the Barker Dam Trailhead. A naturally created pool was additionally created by cattle farmers in the late 18th century with a dam wall to enlarge it and thus have a little pool for their cattle. Even today, this pond is still an important source of water for wildlife. 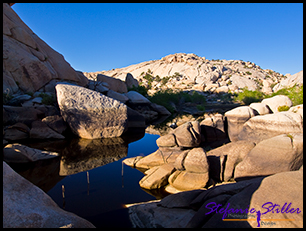 In fact, we also find some water in the pond. We took a short break here and then went the approximately 1.3-mile trail to the end. 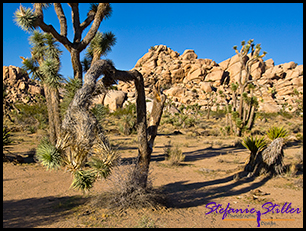 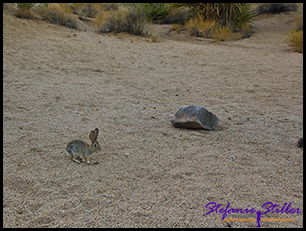 We drove back to our campsite. We were hungry and fired up the grill. We got a visit from a rabbit. Actually, I would have to say that we rather visited him. We discovered a big hole in the ground in front of a bush that probably led to its burrow. 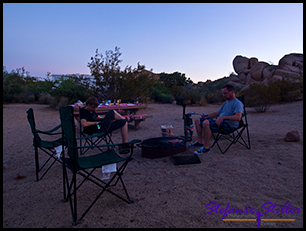 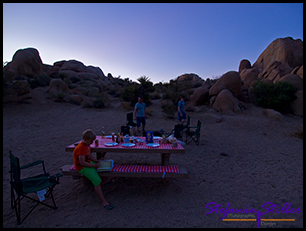 Unfortunately, Marwin wanted to go to bed early, he was not well. Stomach ache and fever were back and he didn't want to eat anything. 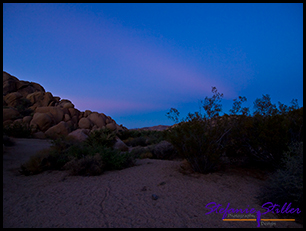 The starry sky was simply fantastic. The Milky Way could also be easily recognized. Until 10.30 pm I sat outside and looked up to the sky. Unfortunately alone, because the rest of my family had disappeared into the RV right after eating. 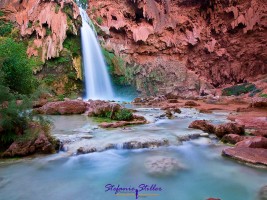 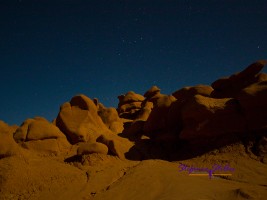 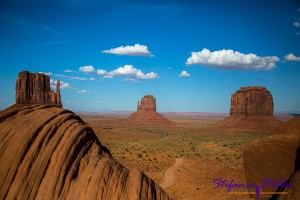 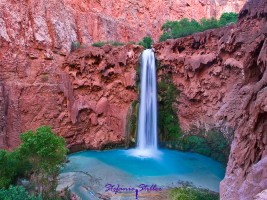